The ends of the earth

I've been incredibly lucky, really, with the amount of travelling I've done, both alone, and since meeting Andy.  When I was writing my speech for our wedding in December, I totted up the amount of countries we've travelled to in our five years together; I got to twenty.  We've lived in three different countries together, and a few more individually.  Travelling and experiencing foreign life is not only part of who I am, it's part of who 'we' are (the dreaded 'we').

However, even though it can bring you riches beyond measure in terms of experiences, stories, photos, meals, and friends, it can also be tough at times.  Really tough.  For all that I love living in New Zealand - it's a gorgeous country, what's not to love? - at times I really, really wish that it were parked somewhere in the Med rather than the Pacific.  This is an entirely selfish concern, I appreciate that most Kiwis and expats love it because of its location, rather than in spite of.  I've been feeling this very keenly recently.  2011 was, to be succinct, a terrible year for far too many people that I love and hold dear.  When the chimes rang in 2012 I sent up a silent wish to the powers that be - that this year would be different.  Sadly, so far, it isn't really looking like it will be - already too many friends have had too much bad news to deal with.  It's times like these that I would like to be at home, offering comfort in any way possible, to the people who need it.  This is not to be, though, and so what is needed are comforting words across the ether, good thoughts and positive wishes for those who are struggling, and a need to bury my own desire to be not on a little island far south, but a little island far north.

At times like these, like most people, I turn to comfort food, food I can make with my eyes closed, food that tastes familiar, rather than strange, easy rather than challenging.  For me, carbonara is the perfect example of this.  I have a long and varied history with carbonara.  I first started making it when I went away to University - I could already cook before I went, but cooking for myself every single night soon expanded my repertoire.  I used a book called, somewhat incongruously, Bachelor's Buttons, and was aimed at people without much clue around the house.  Included were a number of easy recipes, and I eagerly fell on carbonara as it was quick and cheap.  Unfortunately, this version tasted like nothing so much as a plate of scrambled egg and bacon stirred through some pasta.  Nevertheless, I knew deep down that this was a good combination, and persevered.  Some years later, I discovered better versions.  My now-usual carbonara is a wonderfully rich affair, comprising cream and Noilly Prat, amongst other ingredients.  I do try, though, not to keep cream in the house always, mainly because I know I'm likely to drink it straight from the bottle, so when I read good reviews of Rick Stein's carbonara, enriched with only eggs rather than cream, I knew I should give it a go.  I made a couple of changes - I used penne rather than spaghetti as it is always my pasta of choice for carbonara, and I added nutmeg, as I always do when cooking savoury eggy sauces. 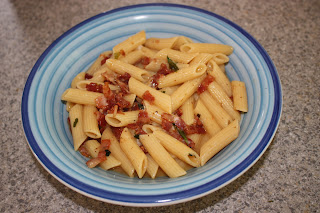 The carbonara was good.  Not mind-blowing, solidly good.  And sometimes you don't want your mind blown.  You just want to feel at home for a while.

Cook the penne in salted water until al dente.
In a frying pan large enough to hold the pasta later, heat the olive oil over medium high heat and fry the bacon until golden.  Add the garlic and parsley, heat for a few seconds, then remove from the heat.
Reserve 1 cup of water from the cooked pasta, then drain well.
Add some of the reserved water to the frying pan with the bacon, stir well.  Add the pasta, stir again until well coated in the bacony juices.  Add the eggs and parmesan, stir, then immediately remove from the heat - the residual heat from the pasta will cook the eggs.  Add nutmeg, and salt and pepper to taste.