"Why on earth don't we eat this more often" is often heard in our house.  The answer usually is quite simple - I'm either following my ADD cooking instinct, flitting from one craving to another, ticking off new ideas, new ingredients, new trends, new recipes, new combinations: finding one, perfecting it, loving it, then moving on to the next like a ruthless serial monogamist.  When I'm not doing that, I fall back on the old favourites, those 10 or so recipes that most people have up their sleeve, with familiar, soothing flavours.

When it comes to breakfast though, I really have no excuses other than laziness.  I am one of those annoying morning people.  My brain is at its most sharpest around dawn, and no doubt declines rapidly over the next few hours.  I am my own boss, so have the luxury of being able to take a little more time rather than joining the morning rush hour. My appetite is even quite keen first thing.  So why on earth do I default to toast 99% of the time?

These little beauties take about the same time as a slice of toast to make, and are a perfect vehicle for getting a portion of fruit in early doors.  The recipe is so easy to remember - loosely based on a Jamie Oliver recipe I saw him do on tv, and it stuck.  The ingredients are so basic that it's a storecupboard staple, and it keeps for a day in the fridge so tomorrow's breakfast will be even quicker. 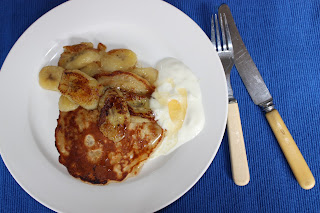 1 cup Self-Raising Flour
1 cup Milk
1 egg
Fruit (optional) - whatever you have in.  Examples that work particularly well are a grated apple or pear, a sliced banana, or a handful of blueberries.
Butter for frying

Mix all the ingredients for the pancakes together.  Melt about a teaspoon of butter in a non-stick pan.  When it foams, put about a ladleful of batter per pancake in the pan.  When small bubbles appear on the top, flip them over and cook for another minute or so, until golden brown on each side.

Today, I grated an apple into the batter, and added a sliced banana to the pan to caramelise while my pancake was cooking.  I served it with a dollop of Greek Yoghurt and a squeeze of honey.