Feel The Fear & Do It Anyway - Puff Pastry

I was having a conversation at the weekend about "fake it till you make it". I recently took advice about being assertive from friends whose confidence I admire.  Some of the best advice I was given was to just pretend I was confident when dealing with a particular situation, and the actual confidence would follow hot on its heels.  Now, in real life I don't think I have enough experience of assertiveness, in true people-pleaser style, but the one place I know for sure this works is the kitchen.  Oh yeah, I'll show my utensils who's the boss of them. So, just proving that I do listen to advice, I made puff pastry.

You've all heard them - all the chefs who say don't bother making your own; the frozen stuff is just as good, and I'd nod along in agreement because, well, that's easy isn't it? But I needed to assert myself over SOMETHING, just to prove to myself I could, and so the puff pastry got it. I used Leith's recipe - I figured a cook book from a cooking school wouldn't steer me wrong, and I was right. And here's the thing. It was surprisingly easy. Yes, you heard me - puff pastry was easy. Sure, it took a lot of time, and I don't think I would have been able to pull it off during one of my hungover cooking sessions, but give me a lazy Sunday, no place else to be, and I really enjoyed it. It takes a lot more water than a regular pastry, but this results in a beautifully smooth, soft dough that is a genuine pleasure to work with. And it worked!  The darn thing actually worked.  Once it was done - because I am still not capable of making a decision and sticking to it - I turned it into a hybrid of millefeuille and tarte tatin.

Right, I'm off to take my newfound confidence elsewhere.  I've nothing to fear but fear itself, and other platitudes.  If only platitudes tasted as good as puff pastry. 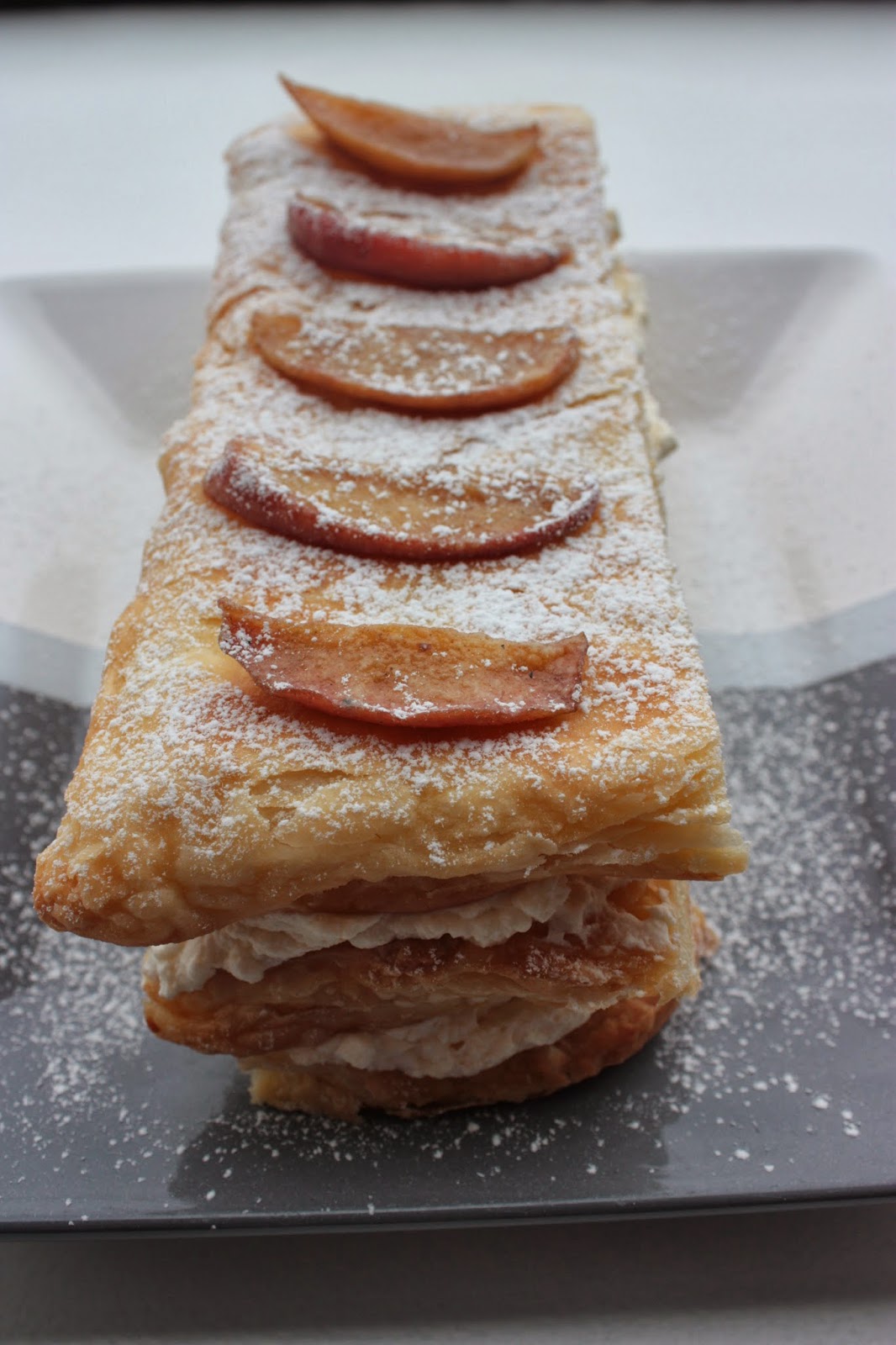 Sift the flour and salt together into a large, roomy bowl.  Rub in the 30g butter, and add enough water to turn it into a soft dough, using only a knife at this stage to bring it together.  On a floured surface, knead briefly until just combined.  Put in a plastic bag and refrigerate for 30 minutes.

Flour the surface again and roll the dough into a rectangle that measures about 30 x 10cm.  I have a useful silicone pastry mat that helpfully has measurements up the side, but you would be able to guesstimate it with no damaging outcome. 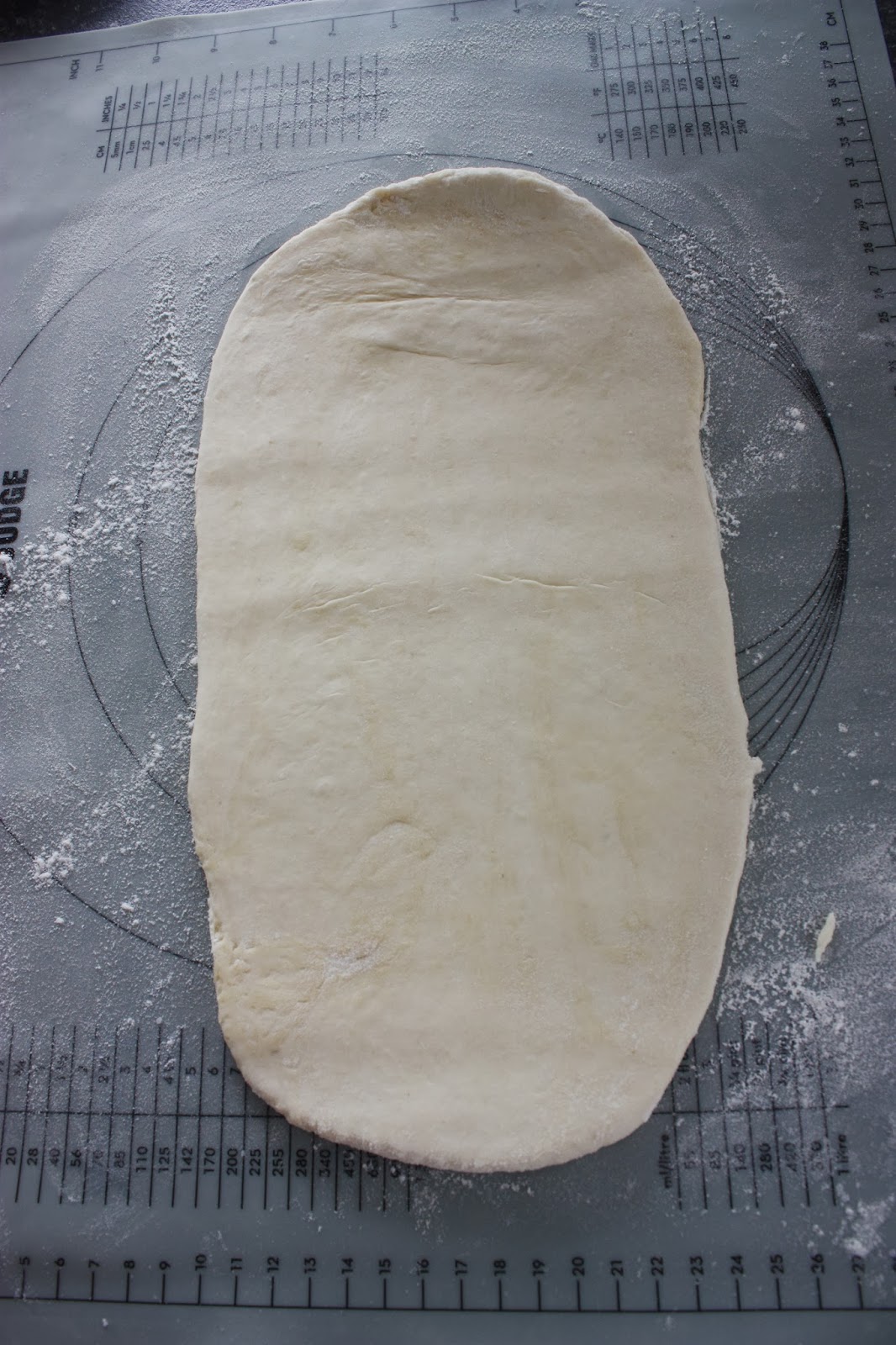 Take your floured rolling pin, and gently tap the butter into a flat rectangle about 8 x 8cm (it should be narrower than your pastry). 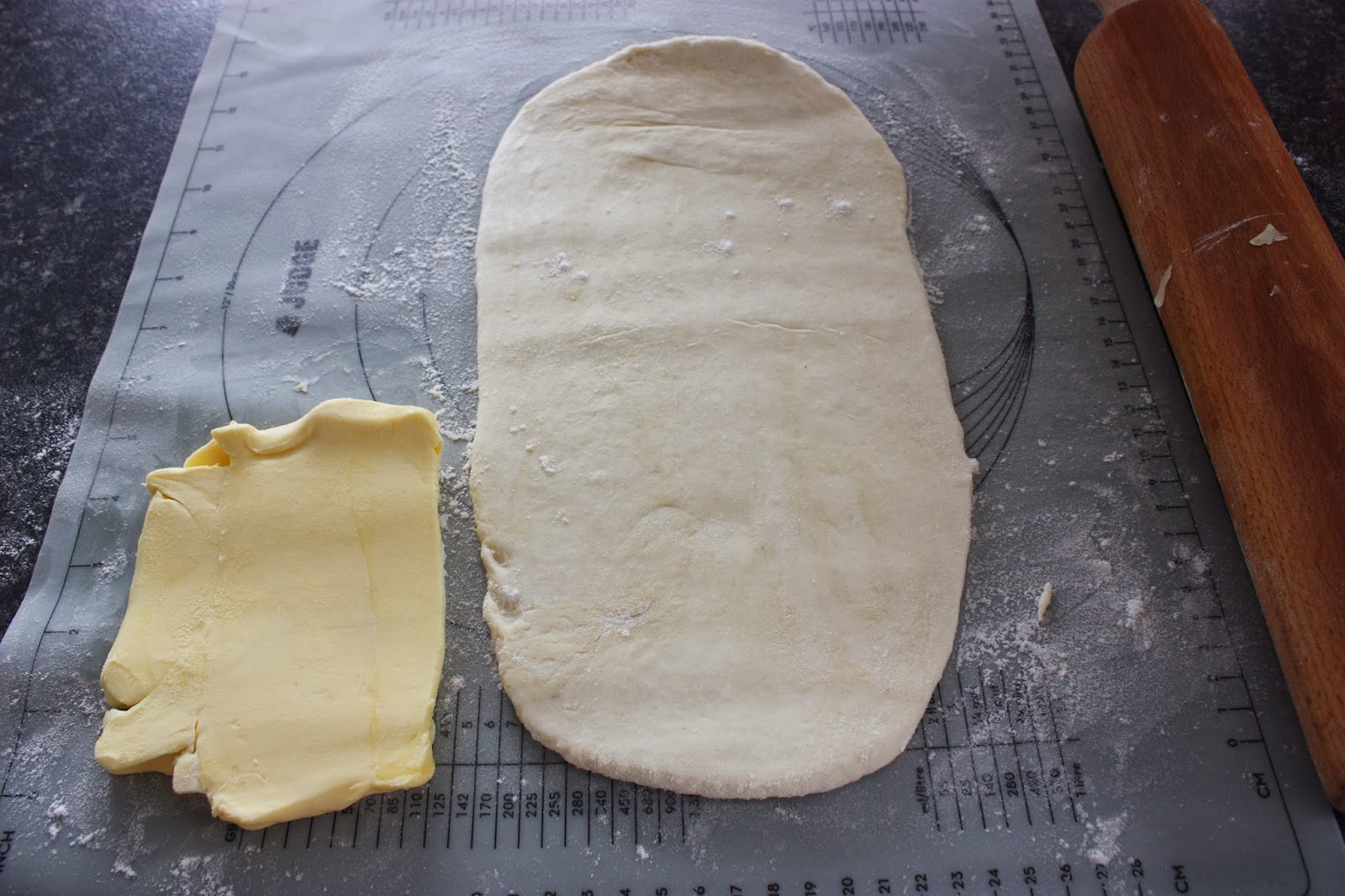 Put the butter on the pastry and fold both ends over to fully enclose it, starting with the third closest to you, then bring the far end over that.  Press the sides together to keep the butter in.  Turn it 90 degrees anti clockwise, so the folded edge is on the left.

Roll it out, lightly and working as quickly as you can without ruining your work, until it is 30 x 10cm again.  Fold it in three again, starting with folding the edge closest to you up, 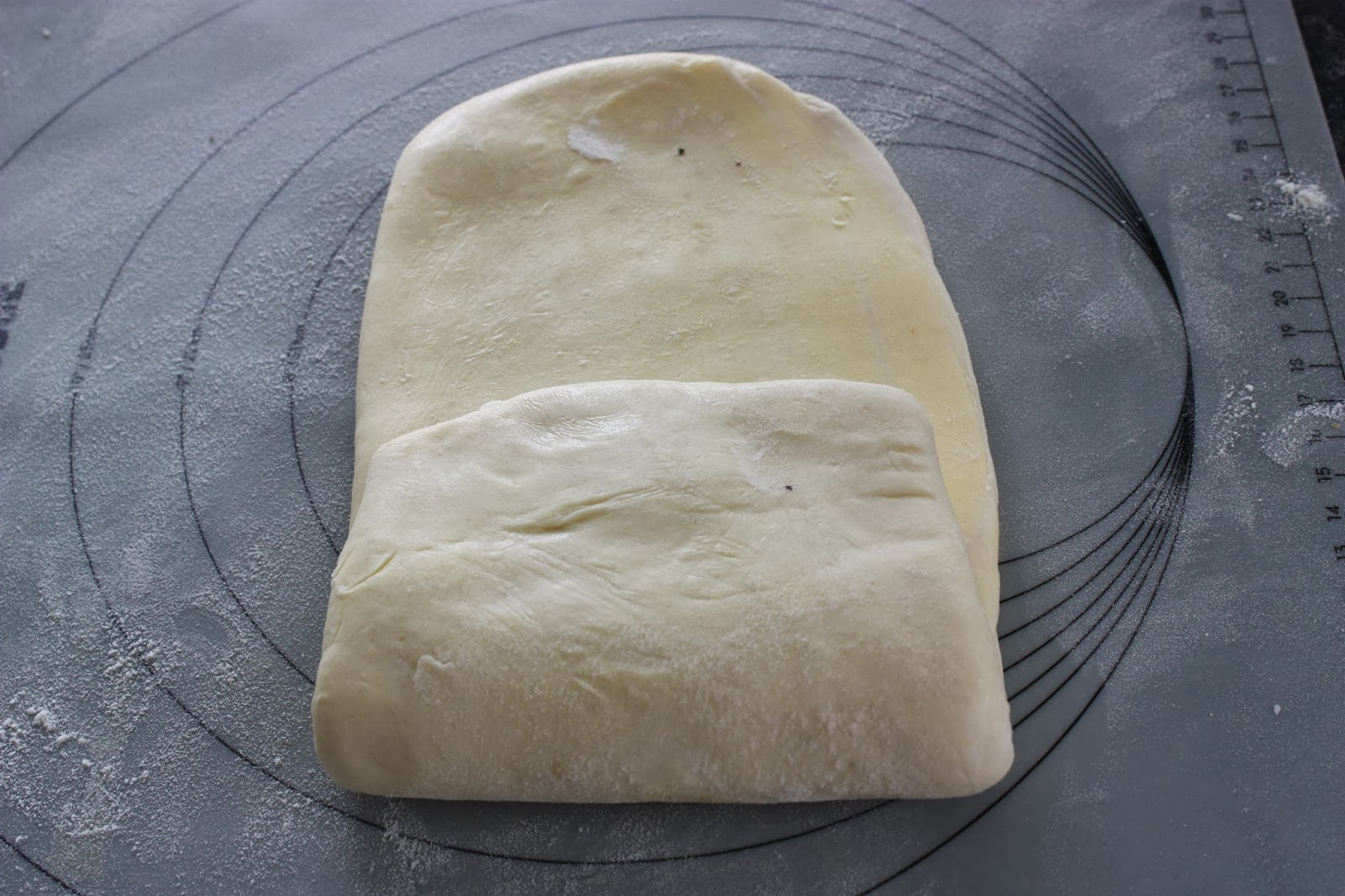 then bringing the top edge down and over. 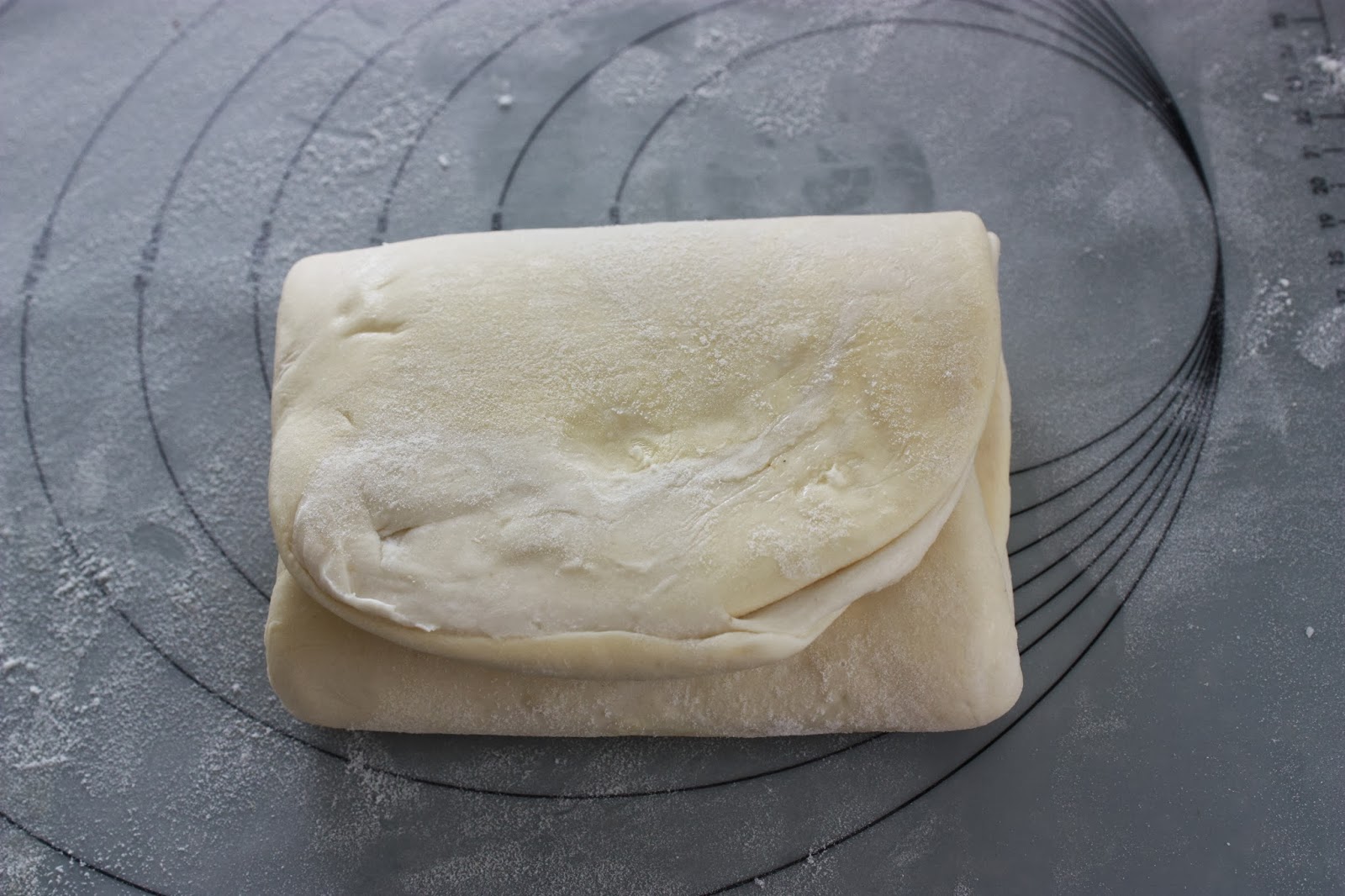 Give it a 90 degree turn again and repeat the process.  Now the pastry has had two turns, and it needs to rest, as no doubt do you.  Put it in its bag in the fridge for 30 minutes or so, before repeating this whole process at least twice more, until you can see no more streaks of butter.

To bake it, heat your oven to 220C.  Roll the pastry out one final time until it measures about 20 x 30cm.  Put it on a baking sheet, and prick it all over with a fork.   Bake for 20 minutes, until risen and golden. 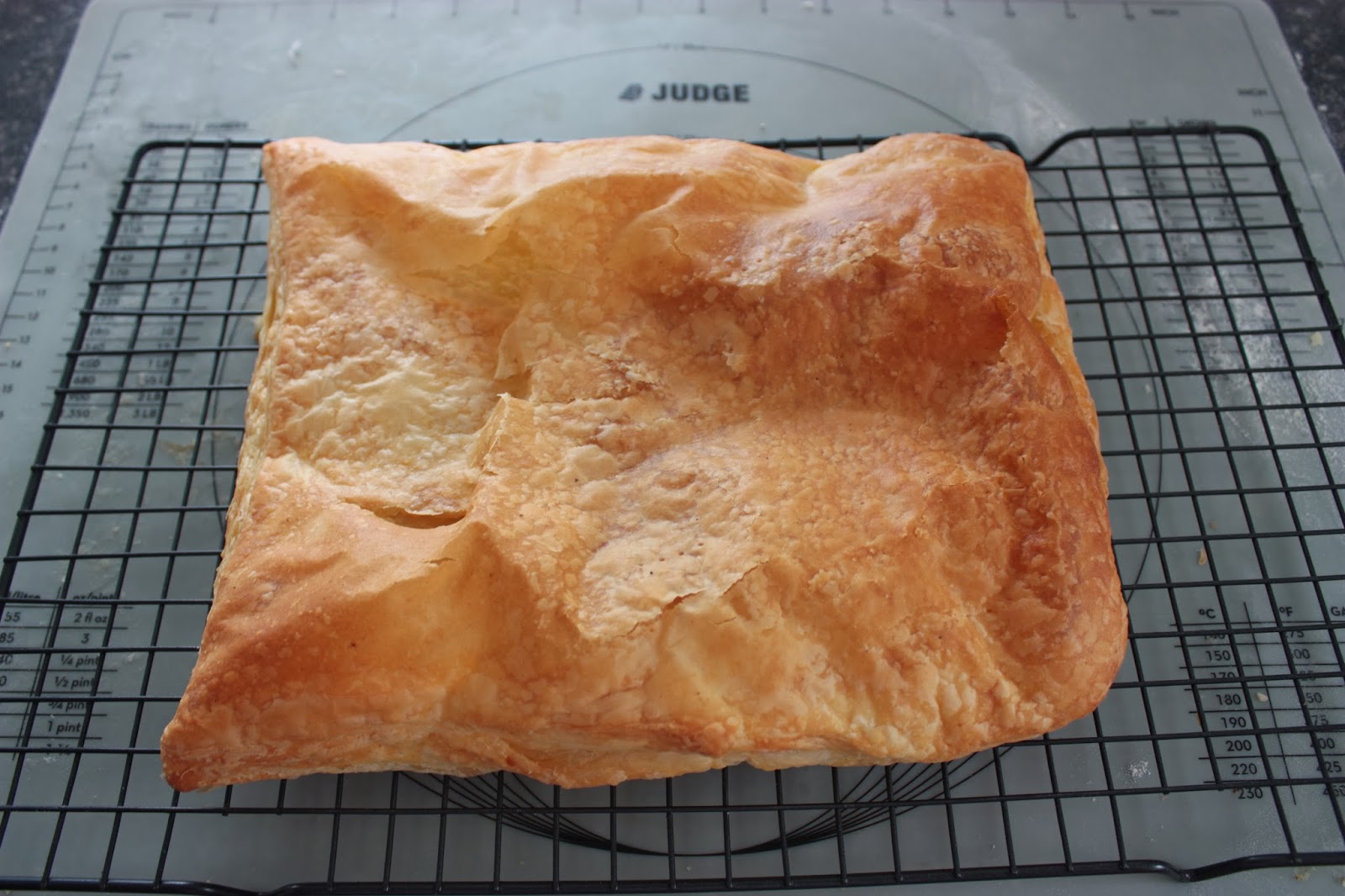 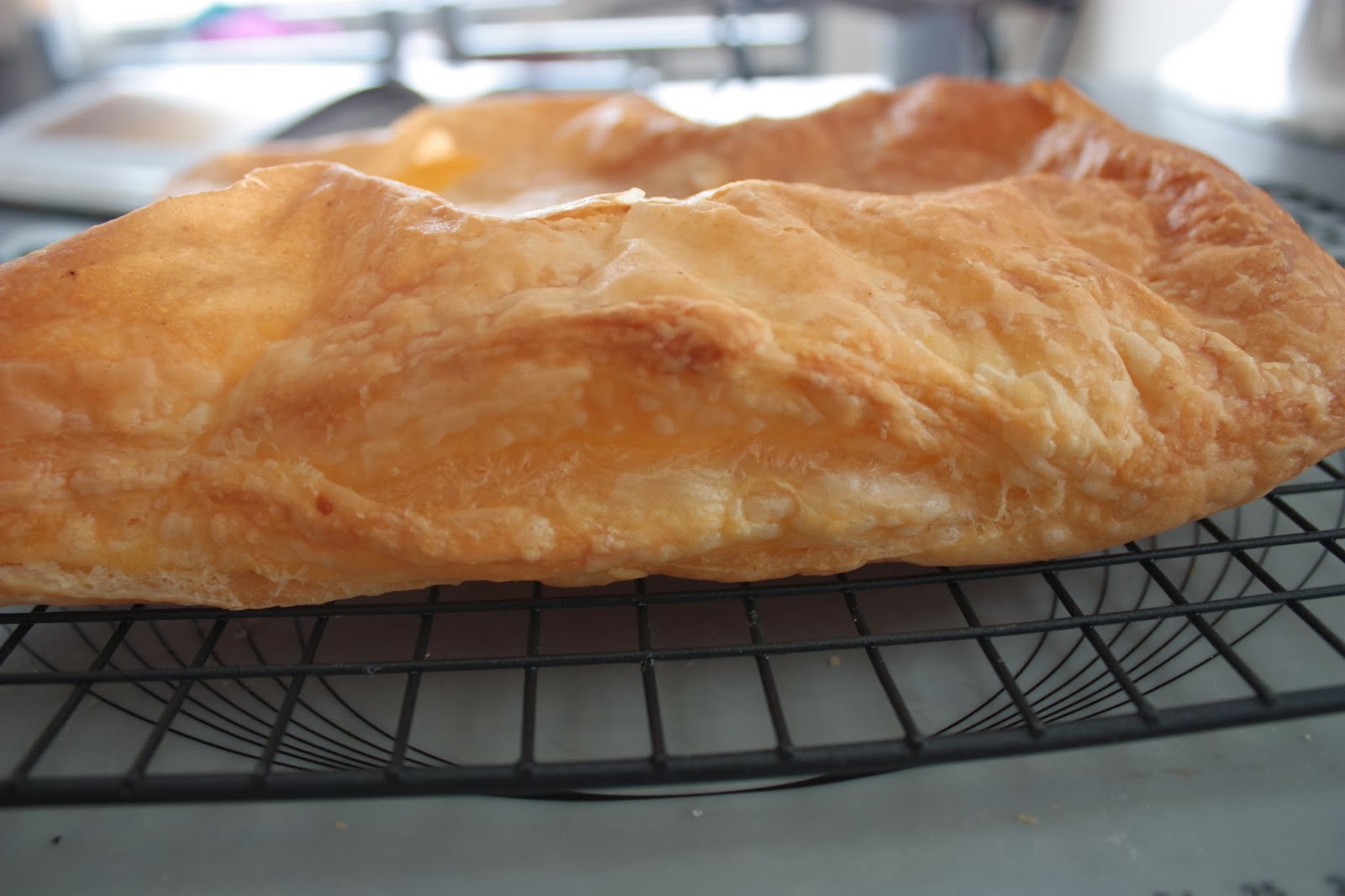 When it has cooled, cut it into three even pieces.

For the Caramel Apple Millefeuille:

Cut the apple into wedges.  Heat a frying pan over a medium heat, and melt the butter.  Gently fry the apple wedges for a few minutes, then sprinkle over the brown sugar, cooking for another few minutes and turning once or twice until the sugar caramelises.  Remove the apple from the pan and leave to cool.

Whip the cream and the brandy together until firm enough to hold its shape.

To assemble, take one of your puff pastry sheets, spread it with half the cream and a third of the apple slices. 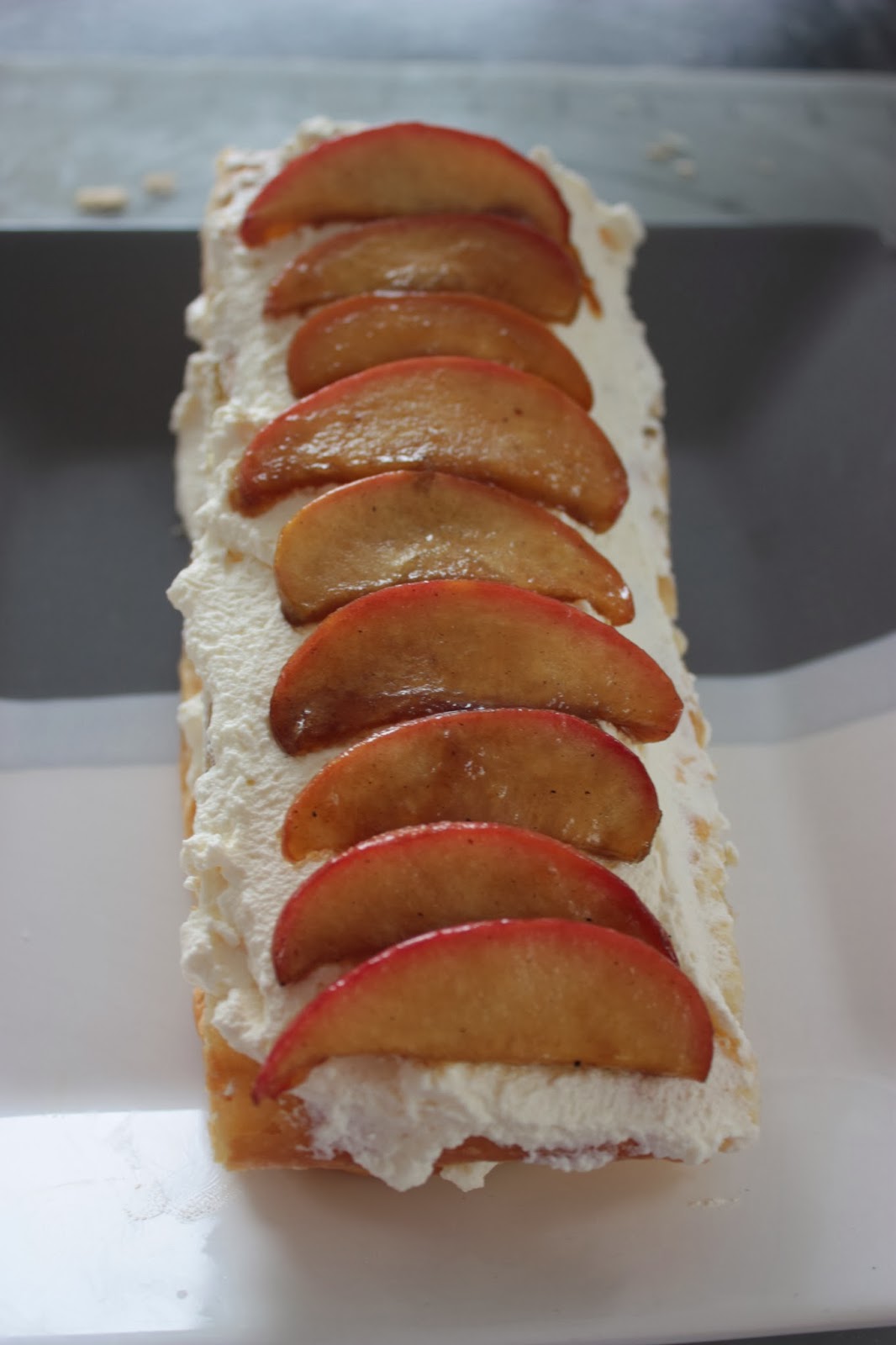 Repeat with the next sheet of puff pastry.  Top with your final piece of pastry, and decorate with the last of the apple slices and dust over some icing sugar. 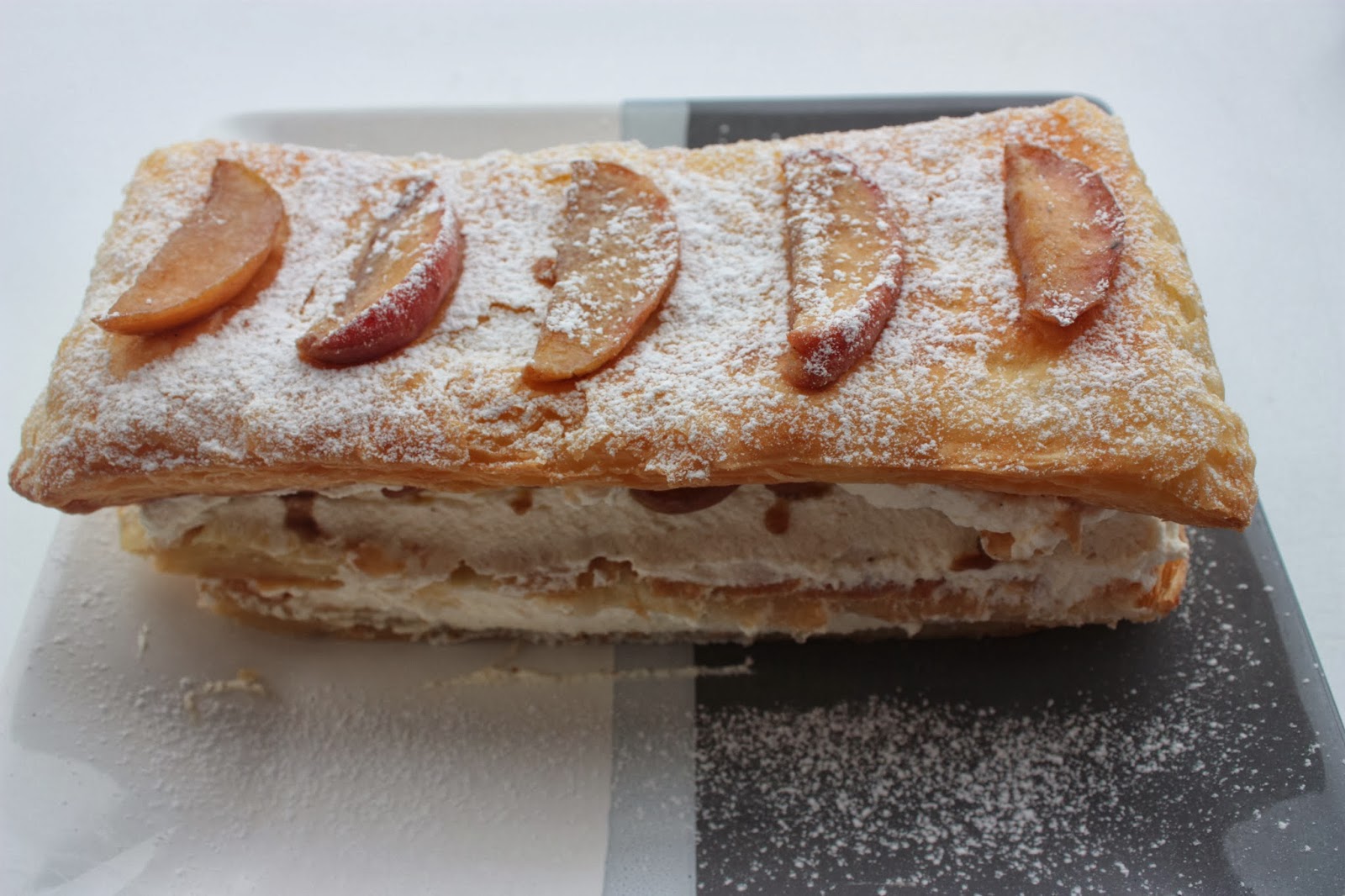