Lentils for the New Year

I love the tradition of eating lentils at the New Year. It ticks so many boxes - it is supposed to be lucky, representing wealth if you take the view that they look like little coins. They are a good vehicle for using up the last of the tenacious Christmas leftovers. They are fantastically healthy, if the predictable January health kick starts as early as the 1st. And they are as cheap as - well, lentils, so helping with the also-predictable austerity measures.

I am somewhat enamoured right now with the website Eat Your Books which acts as a virtual bookshelf. I'm always too scared to count my cookbooks, but know that it is definitely in the three figures arena. Actually, since this year I started my own business working with food, I can tell myself "It's for work, it's for work" (repeat ad infinitum). But the truth is, most of these were bought for me. And, for shame, I am past the tipping point at which I have too many to make searching through them for a specific recipe time-savvy; more often than not I turn to Google. But this website acts as a google for your own books. How incredibly cool is that?

I will be testing it out later this month to find a recipe for the Bake Club that I also started this year, but 1st January, I was all about the lentils. So I typed in, incredibly, 'lentils' (shocker!) and it brought up literally hundreds of recipes that were sitting there on my shelf floor. Most of them, unsurprisingly, were much of a muchness, and no doubt I could have come up with something similar myself, but I'm a sucker for a system that works.  I ended up using a Jamie Oliver recipe that makes big claims in the title ("The most incredible lentils") - don't know if I would go that far but they were just right. Soothing, homely flavours. We had these with sausages (leftover from Christmas Day Pigs in Blankets) and Dauphinoise Potatoes (leftover from Christmas and subsequently frozen), with a couple of florets of broccoli for health. Andy doesn't like lentils as a general rule, but I made him eat a couple for luck.  And since he has been my most constant support through the very up-and-down 2012, I thought it was the least I could do for him. I'm sure he'll thank me one day. 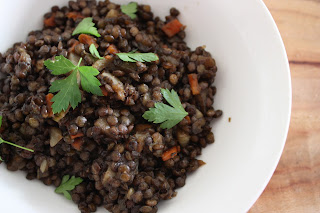 The Most Incredible Lentils
From Jamie Oliver, jamie does...

In a heavy pan or casserole, heat the duck fat and then add the carrot, celery and onions.  Cook on a medium heat for about 10 minutes until softened but not dark, and when they really start to smell amazing, throw in the bouquet garni and lentils. Give everything a good stir to get the lentils covered in the juices, then add the turkey stock and potato.

Eat, while dreaming of the wealth that is sure to head your way during 2013.