Eating out at great restaurants is, to my mind, one of the best value ways to pass the time in New Zealand.  I don't necessarily mean it's cheap, mind you; just that, comparatively speaking, restaurants that are truly world class are more affordable than elsewhere in the world.  One of my absolutely favourite restaurants, not only in Wellington, not only in New Zealand, but anywhere, is the legendary Logan Brown.  We have been lucky enough to go a few times now and, while it is definitely a special occasion date for us, we've always been welcomed in a charming, relaxed way that speaks volumes about the refreshing lack of snobbery in this country.  One tip I got before I went was to order the Paua Ravioli, if it was on the menu, and it was so amazing I still dream about it now.  Light, citrussy, buttery - perfection.  I'm never going to attempt to recreate it, as it would surely end in disappointment.

One of the founders of Logan Brown, Al Brown, has just left Wellington (he lived in the same bay as us - it's magnetic, this place) for Auckland, but his legacy lives on - in this house, at least - through his recipes that he writes for Cuisine magazine.  During the summer, I cooked a barbecue regularly for a local pub, and was always on the lookout for interesting food that I could serve up, and when I saw this recipe for an Indian Burger, courtesy of Mr Brown, I knew it sounded like a winner.

He recommends serving it with an aubergine chutney - which really, really, works - but the second time I made these, I had no chutney, no raita, and so made a simple ratatouille.  Confusing my culinary cultures, I know, but think about the ingredients and there really are no clashes at all.  Just garlicky, really tasty goodness.

We are sadly past barbecue season here in Wellington, so I offer this up to those of you lucky enough to be facing summer in the northern hemisphere.  Wish I was there. 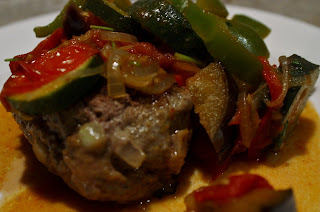 Mix all the ingredients very thoroughly in a large bowl, until it starts to come together.  Divide into six equal portions.

To make the burgers, take each portion and flatten it slightly - don't overwork it or the burger will be tough.  Make a slight indentation in the middle of each burger - this will rise up as they cook and ensure even cooking.

Put in the fridge to set for at least an hour.

To cook, preheat a barbecue or cast iron griddle pan to searing hot.  Brush the burgers lightly with oil and then cook until done - obviously this depends on how thick your burgers are, but about 5 minutes per side should do it.

Peel the onion and cut it into half moons.  Slice the courgettes.  Quarter the aubergine lengthways then cut into slices.

In a large, heavy pot on a medium heat, cook the onions until soft but not brown.  Add the aubergines, courgettes, garlic and capsicum.  Stir for a few minutes.  Add the tomatoes and give another good stir.

Turn the heat down, put a lid on, and cook gently for about 30-40 minutes, stirring occasionally to make sure that the bottom doesn't stick.

Add the coriander, salt and pepper to taste, and stir in a handful of parsley.

This keeps really well in the fridge and is an incredibly useful bowl to have hanging round, if only for eating on toast for breakfast.