I’m the type of person to get starstruck.  As much as I would love to maintain an aura of chic cool around celebrities – my all-too-vocal cynical side screams “they’re just people”, truth is, the aura I project is more giggling schoolgirl than European Woman of the World.  A couple of times I’ve met real heroes of mine in very informal settings (a dog walk; a family party) and my blushing stutterings have provided much embarrassment to me (and no doubt them), and much amusement to all others around me.  And I’m not even talking Mandela or anything; think 90s popstar and 80s footballer.  Even my heroes are lowbrow.  In fact, the only celebrity I’ve ever managed to keep my head around was the late, much disgraced, Jimmy Saville – long story but he once tried to snatch a lemon & blueberry cake out of my sticky mitts and I stood firm, staring him fiercely right in the eyes like a mama bear defending a cub.  All things considered, I'm glad he was the one I didn't fawn over.

Which is why the world of Twitter is a world of wonder to me.  Andy once said to me “all you use it for is arguing with celebrities” which isn’t strictly true – I would find that exceedingly dull, and I do still get the fear that people can somehow see me through the screen – I would indeed be the world’s worst troll – but there have been a couple of occasions when I’ve challenged a celebrity on something they’ve said and they have actually responded.  Again, most of the time we’re talking lowbrow, B list British TV faces, but while they might not like what I’ve said, they’ve taken the time to reply and I’m always properly grateful, like the little starstruck fan I am.  And yes, I do realise that admitting this is the absolute ultimate in uncool – which is what I specialise in, apparently.

So imagine what happens when one of my culinary heroes, the eloquent and informative Aussie-Vietnamese Chef Luke Nguyen, takes the time to respond.  I mentioned him in a tweet, saying that I’d just had these Ribs for dinner, and how abso-flipping-lutely amazing they are, and he, bless his lovely little cotton socks, replied saying something along the lines of “glad you liked them, I’m having the same for my lunch!”.  A lovely man and someone, for once, who is deserving of the hero moniker.

As are these ribs.  Proper hero ribs.  Sticky, melting, well-balance Vietnamese flavours.  I roast them as suggested in the recipe, but next time I’m very tempted to stick a bit of water in the tray and slow roast them for ages, really let those flavours get to work and make the meat even more unctuous and fall-off-the bone.  Served with plain steamed rice and garlicky broccoli, they are one of my favourite dinners of all time.  A real hero of a dish.  And I’m glad I told Luke Nguyen so. 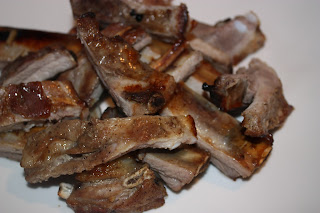 First, marinade your ribs.  In a bowl big enough to take everything, mix the rice wine, soy sauce, fish sauce, oyster sauce, honey, five-spice, all the garlic cloves, and add the ribs.  Leave to marinade for as long as possible, at least 2 hours but these bad boys could take much longer if you get organised in time. 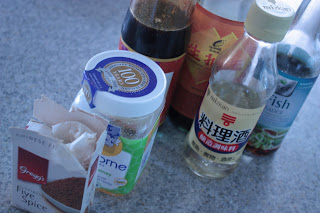 When you are ready to cook them, preheat your oven to 200C.  Put the ribs in a single layer in a roasting tray.  Bake for 30 minutes, basting every 5-10 minutes with the spare marinade.

When they are golden and crispy on the edges and fully cooked through, chop them into seperate ribs, and garnish with the spring onions.

Serve with steamed rice and broccoli.