Our Own Interests - Celery and Chard Gratin

Every so often, Andy or I tentatively suggest a new outing, a new hobby, a new interest, to see if the other would be up for joining in.  "I see they're doing salsa lessons down on the waterfront this summer" we casually throw into the conversation.  "I see Dolly Parton is playing up in Auckland".  "I'm thinking of starting a book club".  "I want to go to the gaming exhibition at Te Papa".

(Three of those were mine, one was Andy's, and I'm not telling which).

At this point the other will start looking wildly round them, clutching at their hair and clutching at straws, until we come up with the ultimate safe get-out clause.

"I think it's important that we have our own interests".

Seriously - that line has got both of us out of more socially-induced awkwardness than anything else.  A real relationship saver, and I selflessly offer it up to you to use as you wish.

Celery, I would say, is my own interest.  Andy is definitely happy to palm that one off on me.  I go through a fair bit of it, it's true, as the basis of most soups, stews, sauces, but that does mean that there's usually a few sticks, looking limply folorn every time I open the fridge.  And as there's only me to eat it - strictly my own interest, you might say - I love finding new ways to use it up.

This recipe, inspired by an Ottolenghi article in The Guardian, is great, with the proviso that you really, really do have to like celery to enjoy it.  As much as I agree with him that it is often unfairly maligned, there is no escaping the fact that this is a very celery-ish dish.  The lemon in it was incredible though, and lifted the whole thing out of the ordinary.  And let's not forget that topping - almost 50% parmesan.  No arguments from me on that front, whatsoever.

I will keep this as my little secret. 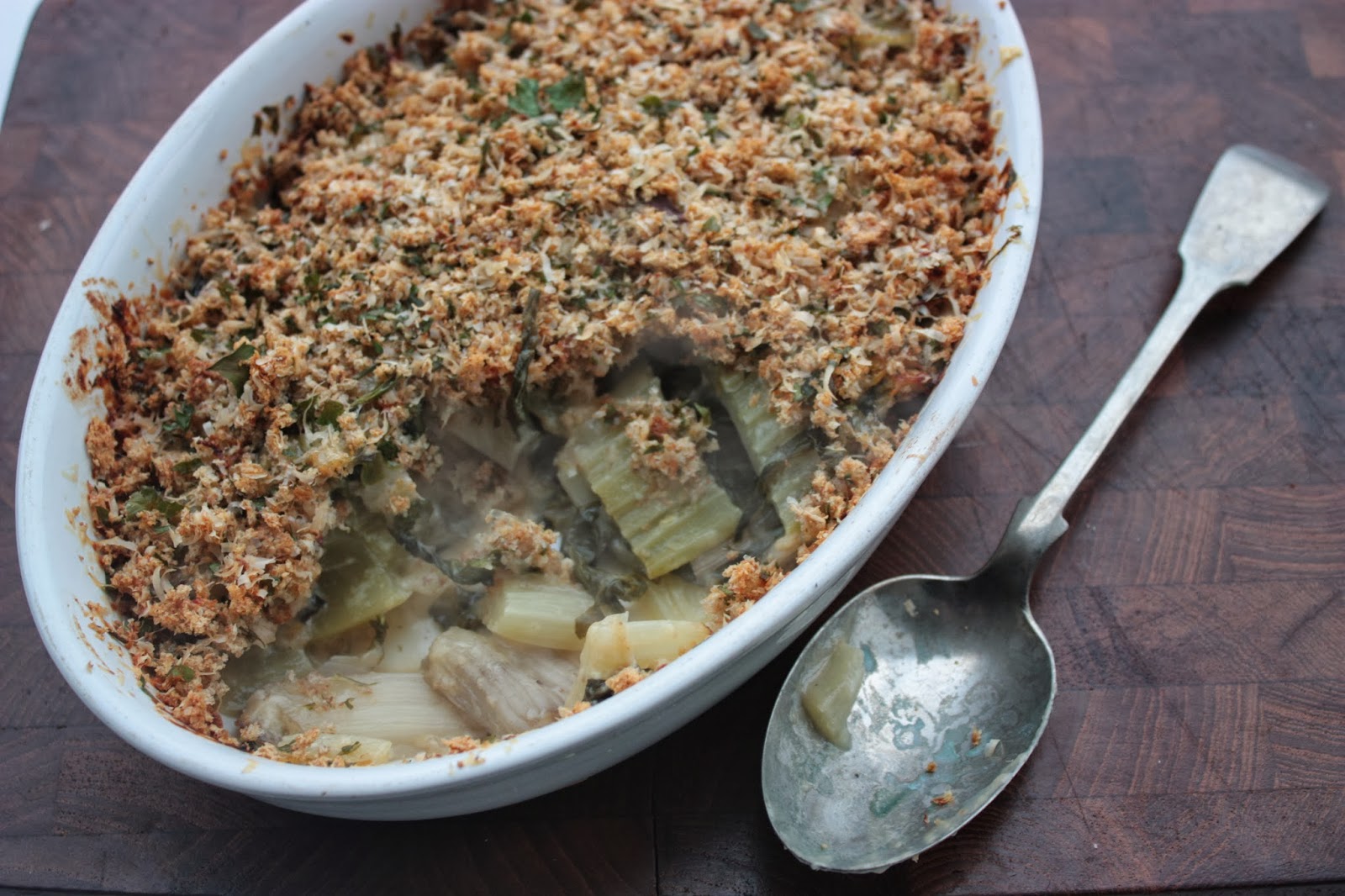 Simmer the celery, bay leaves, and lemon zest strips in the milk for about 12 minutes, until soft.  Strain and reserve the milk (you should have about 200ml left after simmering).  Set the celery to one side; discard the bay and lemon zest.

Clean the pan (I used my non-stick frying pan but it is coming to the end of its days and non-stick isn't so much a misnomer any more as a downright dirty lie), using as much elbow grease as your pan requires.

Fill your clean pan with water, bring to a boil, and add the chard stalks.  Cook for 2 minutes, add the chard leaves, and cook for another minute.  Drain and dry well.

Wipe the pan again so it's dry.  Melt the butter over a medium heat.  Saute the drained chard for a couple of minutes, then add the celery.

Add the flour and stir for a minute or so to cook it out.  Gradually stir in your reserved milk, lemon zest, and the juice from your lemon until you have a thick coating of sauce for the vegetables.

Put this mixture into a smallish gratin dish.

Mix the breadcrumbs with the parsley and parmesan.  Pour this topping on top of the vegetables, and bake for 30 minutes until the sauce is bubbling and the top is crunchy and golden.

Don't serve this immediately out of the oven; instead, leave it 10 minutes or so.

Serves 4 as a smallish side or 2 as the highlight dish.