It was like coming home,
only to no home I'd ever known
~ Sleepless in Seattle

I know, any semblance of credibility shot, right?  No shame.  I love that movie (and rest assured, my taste in music is much, much worse than my taste in films).  I have a great memory of watching that film at the cinema in my teens with my mum.  Spoiler alert: look away now if you don't want to know whether this Rom Com has a happy ending or not.  Towards the end of the scene at the top of the Empire State Building, as the little boy was being led away and we think that Meg 'n' Tom's one chance to find happiness with each other is being led away with him, Mum leant over to me and, in a stage whisper that was loud enough to frighten the horses and certainly loud enough for everyone else in the cinema to hear, said "HE'S LEFT HIS TEDDY BEAR!"  A spoiler along the lines of when I leant over to my companion during Sixth Sense and said "It is obvious he's dead, right?".  Like mother, like daughter.

Anyway, I digress, but I was thinking about dhal this week and it always brings to mind the lines above from Sleepless in Seattle.  To me, this, the most simple meal of lentils, tastes of home.  Why, I don't know.  I grew up in the industrial North-West of England and, though my mum was a wonderful cook, dhal (or any lentils, come to think of it) were never on the menu.  We were encouraged from a very early age - indeed, from babies - to try all cuisines, but I don't remember dhal appearing on the Indian menus.  And yet, and yet.  This gentle mix of lentils or split peas, warming spices and liquid is everything a home should be, and everything my home was.  Welcoming.  Embracing.  Warm.  And so, eating my first dhal was like coming home.

This is my favourite dhal recipe, and God knows I've tried many over the years.  Funnily enough, it comes from a film maker - Ismail Merchant, who apparently used to use food, and cooking for people, as a way of persuading stars to appear in his productions.  Something tells me I would have liked that man a great deal.

Anyway, try this.  It blows me away every single time I make it, which is lots.  And it makes anywhere taste like home, even when you are far away from people you love who stage whisper during films, just like you do. 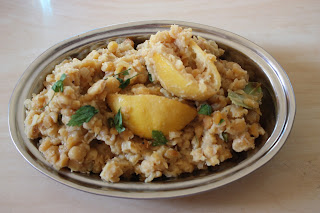 Lemony Dhal
Adapted from a recipe by Ismail Merchant

In a large pan, gently heat the half cup of oil.  Add the sliced onions and fry until soft but not browned.  Add the cinnamon, lentils and ginger.  Cook for 10 minutes, stirring frequently to stop it sticking.  Add the stock, 2 cups of hot water, salt and pepper.  Squeeze in the lemon juice, and throw in the lemon shell too.

Bring everything to a boil, then reduce right down to a gentle simmer.  Cook for about 50 minutes, until the lentils are soft and cooked through.  Add more liquid if it needs it - it should be thick and stew-like.

In a small pan, heat the remaining oil.  Add the onion, chilli, garlic and bay leaves, cooking until starting to brown at the edges.  Stir this through the cooked lentils.

Sprinkle with the coriander.

Serves 6.  Keeps wonderfully in the fridge and, in my opinion, makes one of the best breakfasts in the world. 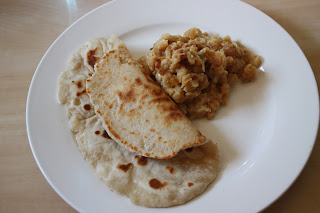