AKA Because what this blog needs is another leftover pork recipe

When we moved to NZ, one of my conditions was that we live in a city.  As antisocial as I am, I thrive in cities.  It's definitely easier to be anonymous in them, which is what I need -  if you were as scruffy and slovenly as I am, you'd need anonymity too - the high-pressured fishbowl of small town life just isn't for me.  And although Andy says that he'd love to live out in the country with all the psychos and axe murderers (listen, I've seen Misery), he's such a night owl that I think, deep down, he needs the city too.

The thing about cities, even in a small city like Wellington, is you get the best of both worlds.  There are the constants, the institutions, the things that will never, ever go because the locals just won't let it.  And at the same time, the changes, the new ventures - well, they're pretty exciting too.  Working for myself, I don't get the chance to mooch through the city centre as much as I used to, so yesterday, when I had an appointment in town, I took the opportunity to have a wander round.

It was just in the middle of noticing a couple of new places - a new bar on Dixon street, oh and when did Perrett's cafe turn into a Mexican place? - that I noticed something else new.  People were wearing extra layers.  No longer just the thinnest, smallest piece of clothing available, as has been the norm all summer - but here I spotted cardigans.  Jumpers.  Shades of dark green, brown and yellow.  In short - autumn clothes.

Now, I am a summer-loving lizard, no doubt about it.  I reckon I could live very, very happily in winterless Asia.  But this I will say - I do not suit summer clothes.  The British gene, maybe?  I always look creased, sweaty glowing, fractious, in the summer.  I do not look cool and elegant, much a I aspire to that.  I find it much easier to be one step closer to chic in the autumn and winter.  I suit hats!  I suit structure!  Autumn clothes are my friends.

With autumn in mind, I decided to (yet again) defrost some pork from the freezer and turn it into something completely new for us.  Those of you following the pork saga will be delighted to know I am down to the last bag of it, which I reckon is earmarked for pork chilli.  Mushrooms always seem very autumnal to me, and so I made a Pork and Mushroom Ragout, very loosely based on Nigella's Mushroom Ragout from How to Eat, but very much simplified, as I wasn't in the mood to start with the three pans for one dish.  This was lovely - quite salty, even though I didn't actually add any salt - probably because the pork was salty to start with and I used stock from a cube (YEEEESSSS the last of the turkey stock from Christmas is also gone).  I would love to try this as a veggie dish, as was originally intended, as I think the mushrooms were the star here.

I served this with polenta, which I tried to turn into cheesy polenta, but it's just so disheartening really, isn't it?  No matter how much butter and cheese I stirred in, all it tasted of was blandness.  "It looks like secret mash" said Andy sadly, peering in the pan.  Yes, but not as nice.

Pig's ear of a photo but a tasty, quick tea if by any chance you have a million bags of leftover pork knocking round in your freezer. 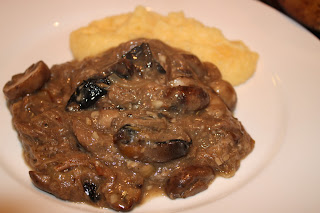 Mushroom and Pork Ragout
Inspired by Nigella Lawson, How To Eat


Wipe the mushrooms, then slice them into thick pieces.  In a non-stick pan, gently heat the olive oil and butter.  Add the onion and fry until soft.  Throw in the garlic, bay leaf, and dried thyme, and fry for a few more minutes.

Add the mushrooms and a pinch of cayenne to the pan and fry gently until cooked and starting to release their juices.  At this point add the pork, stirring until it is warmed through and sizzling.  Stir through the flour, making sure everything is evenly coated, then gradually add the vermouth, leaving to bubble for a minute or two to get rid of the harsh alcohol taste.  Slowly stir in the chicken stock, and give it a good grating of nutmeg.  Check for seasoning but it might well be ok.

Leave to bubble gently while you heat your disappointment of a side dish.