My oven burns hotter than the hob of hell, and is definitely one of the things I won't miss about moving (what? I haven't bored you enough with our housing woes? We STILL haven't found anywhere to move to). After numerous cakes ruined, dinners burned, and tearful toddler-style tantrums, I eventually invested in an oven thermometer.  We used this to figure out that our oven - and this is no exaggeration - heats at 50 degrees C over what it should.  So to cook something at 200, we need to put it on 150, use the bottom shelf, and even then we still can't relax.  It was only recently that I figured out I should have used all of our two years here to be making awesome pizza, which needs a scorching hot oven, but I'm not that smart and keep torturing myself with slow-cooked food.

Including our lamb on Easter Sunday.  "I will do slow-cooked shoulder!" said I.  I couldn't find shoulder, so bought a leg.  "I will do slow-cooked leg!" said I, with visions of melty, garlic-and-rosemary-studded glistening, succulent meat.  But no, our oven had other ideas, ignoring the lowest setting I'd put it on, and cremating the lamb to within an inch of its poor young life.  Even with good sides - the creamed spinach was delicious ("the best you've ever made" said Andy between mouthfuls) it still made me sad, and feeling like I needed to perform a serious rescue mission.  And I knew exactly the woman to bring along with me on this mission.  Madhur Jaffrey.

This curry is a way of transforming even the most dry leftover lamb.  It has such an affinity with warming Indian spices - in fact, most of the meat curries I ate in India were either sheep or goat - the generic 'mutton' being much used and, in fact, referring to both these animals, so who knows?  Curry roulette.  It infuses the meat with spiced, perky liquid and is such a triumph in itself that you forget all previous disasters. 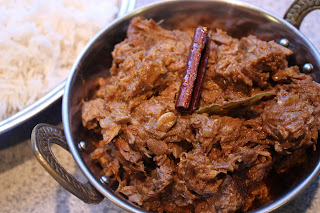 Put the ginger, garlic and 2 tablespoons of water in a food processor, and blitz until it forms a paste.  You might need to add more water to get it all to combine smoothly.

In a big, heavy-bottomed pan, heat the oil.  If you are using uncooked lamb, brown it in batches then set aside.  (If you are using leftover roasted meat, ignore this step).

Into this hot oil, put the cardamom, bay leaf, cloves, peppercorns and cinnamon.  Leave for a few seconds until it gets really aromatic and the cloves start to swell.  Add the onions and cook, stirring frequently, for about 5 minutes, until they start to get tinged with golden brown around the edges.

Add the ginger and garlic, cook for about a minute, then add the coriander, cumin, paprika, cayenne and salt.  Add the meat, and any juices that have run off it.  Gradually stir in the yoghurt until smooth, then cook, still stirring, for another 2 or 3 minutes.

Add the water, bring to a boil, then reduce to a low simmer, scraping all the tasty browned bits from the sides and bottom of the pan.  Cover, and cook for about 1 hour if you are using uncooked meat, and about 30 minutes if you are using pre-cooked meat.  Stir a few times, and add a bit more water if it looks like it will burn.

When it is tender, take off the lid, turn the heat up to medium, and stir through the garam masala and black pepper.

Serve with steamed basmati rice and a sense of redemption.