There is nothing duller than reading about someone else's ailments, so I'll keep the dullness brief: the cold and fever I'd mentioned last week took a bit of a turn for the worse, and for a couple of days there I was really out of it, full on can't-get-out-of-bed feel bad.  I'm still woozy but as the doctor's haven't been open over the weekend and I'm so cheap and British I resent paying for a medical service (Go NHS! Whoooooo!), I'm self diagnosing and putting up with it, with only minimal whingeing.

After a couple of days flolloping around I was ready to eat something, so Andy made me my all time favourite, roast chicken with lots of lovely roast veg and gravy.  Heaven.  After a couple of days more, I was able to stand unaided and made this pie, which is my favourite thing to do with leftover roast chicken.  Originally from Nigella's How To Eat, I studiously ignore the fact that it is in the feeding children section. 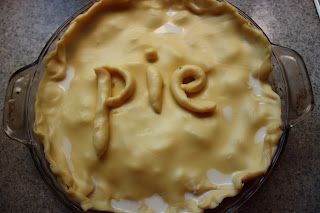 This pie was so popular when I made it years ago for my friend EA that he asked for it for a Christmas present, and I am so unimaginative that I made it for him for years, until I moved to the other side of the world to avoid making the pie again.  The secret is in the sauce - adding extra savoury flavour to the white sauce really does make a difference.  And I've since seen Marco Pierre White doing it, so it must be true.  MPW wouldn't lie to us.  You do actually need a stock cube or liquid stock concentrate for this, rather than just stock, so make sure it's the best you can get hold of.

Usually I just make it with chicken and throw some frozen peas or sweetcorn in (or both, if I'm feeling especially rakish) depending on what I've got in; this time I made it using some ham from the freezer up as well.  Standing up and using up freezer items - I am quite the winner. 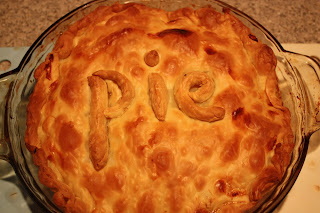 Chicken Pie
Adapted from Nigella Lawson, How To Eat

Make the pastry: either rub the butter into the flour until it looks like breadcrumbs, stir in the egg yolk and add just enough ice cold water to combine, or in a processor blitz the flour and butter, add the egg yolk, and with the motor running, drizzle in some cold water to just come together.  Put the pastry on a layer of clingfilm, put another layer over it, squish it out into a flat disc, then put in the fridge while you make the filling.

In a heavy-based pan, melt the butter over a medium heat.  Crumble in the stock cube, or stir in the stock concentrate.  Add the flour and cook, stirring, for a few minutes.  Gradually add the milk, starting with a splash at a time, until it turns into a thick sauce, when you can add it a bit quicker.  Keep stirring, bring to a simmer then lower the heat, stirring regularly.  Stir in the mustard and give a good grating of nutmeg.

Stir in the chicken, ham, and vegetables if you are using them.  Taste for seasoning.  Set to one side.

Split the pastry into two pieces, one twice the size of the other.

Take the larger piece and roll out on a floured surface, until it is large enough to fit your pie dish.  Drape it over your rolling pin and lay it out over the dish, pushing down gently.  There should be some extra pastry hanging over the sides.

Put your filling in the dish.

Roll out the remaining pastry until it is big enough to fit as a lid.  Place it on top, pinching the sides to seal the edges.  Trim off the extra pastry and, if you are so inclined, use these trimmings to decorate the top.

Make a few small slits in the pastry (mine were cunningly disguised just underneath the letters), and brush the top with milk.

Bake for 45 minutes, until the filling is hot and bubbling.

Eat while lying down, thoroughly exhausted (ok, I was lying when I said the boring whingeing would be brief).