So, having waxed lyrical and at great length a week ago about a recipe that didn't work because it tasted of lard, what do I do but hit you with another.  Except this one actually works.  You just have to take a leap of faith - so it is appropriate that I tell you about this on Easter Weekend. 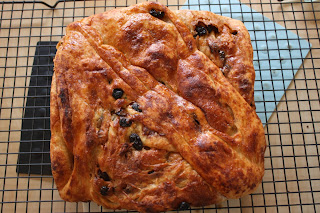 Thinking about it, it really would be a great recipe to add into an Easter repertoire, if you are the sort of person who has such a thing.  The flavours are reminiscent of Hot Cross Buns and the ingredients - well.  The purpose of Shrove Tuesday, we are told, was to use up all the good stuff before the denial of Lent kicked in.  This recipe would certainly be a celebration of a return of hedonism and an end to self-denial.

I made this recipe for our Bake Club.  The theme that was picked for us this month was Use Your Loaf - a challenge to us all to bake some bread.

Here was Andy's offering - looking at that braiding he is my new nominated hair-doer:


My sourdough didn't work out and so, at the last minute, I was hanging off the fridge door trying to spy something that could successfully be turned into a delicious treat for my friends.  I spotted half a tub of lard that was lurking there in shame after the last use and somewhere, far away in the back of my mind, rang a bell.  A bell that sounded like flaky, yeasted dough, sugar, dried fruit and the warming spices that I love, and a cake that was in fact a bread.

Lardy cake (clue's in the title, folks) originates in the South West of England - not my area, and yet I have a definite memory of these from when I was young.  The lard - even though there really is a stonking amount - creates a light, melting, flaky, somehow sweet and savoury at the same time, yeasted bread.

What can I say to convince you that this is really, really good, and worth the leap of faith?  It won Bake Club.  And later, the spoils were torn apart and eaten in seconds.  It's that good.  But don't take my word for it.  Can you make that leap? 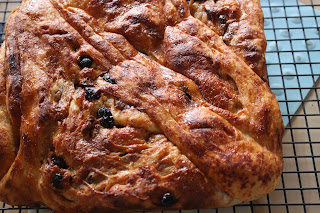 Lardy Cake
An amalgamation of the millions of recipes out there


In a large bowl (I use the Kitchen Aid but this is certainly do-able by hand), mix the two flours, lard, sugar and yeast.  Stir in the water.  If you are using a mixer, switch to the dough hook and knead for about 8 minutes.  Otherwise, tip onto a floured surface and knead for about 10 minutes, until smooth and silky.

Put in a bowl, cover with cling film, and put in a warm place for 1-2 hours, until doubled in size.

Meanwhile, mix together the brown sugar, spice and fruits.

When the dough is risen, start by knocking out all the air with a punch (this is strangely enjoyable).  Give it a brisk, scant kneading - 30 seconds or so - then roll it out on a floured surface to make a long rectangle, approximately (don't get your ruler out or anything) three times as long as it is wide.  Sprinkle a third of the sugar mix over, followed by a third of the lard.

Starting at a short end, roll up the dough like a roulade/jam roll/any other analogy that takes your fancy.  Press down hard at the ends, to seal in the sugar and fruit.

Repeat this one final time.

Roll out the dough so it will fit into a square baking pan, about 23 or 24cm.

Cover and leave in a warm place for about 40 minutes until well risen.

Meanwhile, preheat your oven to 200C.

Bake the cake for about 30 minutes (although start to check just before this to prevent burning).  When it is out of the oven, brush with the glaze.

When it has cooled for 10 minutes, turn it out upside down onto a cooling rack and leave it this way, so all the fat runs back through the cake.

Slice/tear and share the bread - believe me, this is not one to devour by yourself and not just for lard reasons.  Your friends will love you, as long as you don't tell them just how much lard has gone into this amazing bread.  And even if you do, they'll get over it.