I'd bought it for something.  That much I know.  Even right now, very late summer (I'm resisting with all my might the word 'autumn' even though the summer we've had here in Wellington has been so generous, so outstanding, so everlasting, that we really will have no right to resent the onset of the cooler months) when everything is at its very ripest, overspilling with scents and sugar, I know I'd bought this aubergine for something and not just "I'll think of something to do with this".  Something specific.

But, with my advancing years and my ever-changing schedule and with my propensity to change my mind about food on a regular basis, I'd be damned if I could remember what that something was.  Pickle?  Not just one, surely.  Griddled?  We had no opportunity to get the barbecue out over the last couple of weeks.  Roasted?  In this heat?

And so I found myself, alone in the house with any aubergine nay-sayers out working a late shift, eggplant in one hand, brow furrowed, and, as luck would have it, the latest copy of Cuisine Magazine in my other hand.  (While we're on the topic, I should take the opportunity to say that Cuisine has been one of the most surprisingly pleasant discoveries, food-wise, of our move to NZ).  I was one step away from hurtling full-on into senility and actually asking the aubergine, out loud, exactly what I was supposed to do with it, when a germ of an idea took place in the form of a recipe from my eagerly-awaited magazine.

Embracing my beloved Indian spices, it fries an aubergine till soft and fragrant, then douses it in a sharp, versatile yoghurt dressing.  It is quick, and the most serendipitous reason I can think of for finding a lonely, unused aubergine in your fridge. 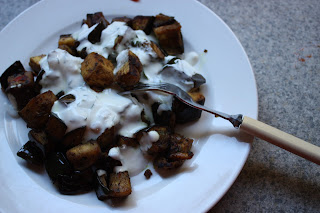 In a bowl, mix the coriander, cumin, lemon zest, and coriander leaves and stalks.  Add the diced aubergine and toss to coat.

Heat the olive oil in a frying pan.  Gently fry the coated aubergine until soft - about 10 minutes.  Add the lemon juice and chilli, and season well with plenty of salt and pepper.

While this is cooking, mix the yoghurt and herbs together.  Drizzle this over the cooked aubergine.