Something that nobody tells you before you take up with a Welshman is how passionate, consuming and welcoming the Welsh community is, anywhere in the world.  Because of various connections we have out here, Welsh people now make up the majority of my expat friends out here.  As an Englishwoman this does mean developing a relatively thick skin at times, especially where rugby is concerned, but for the days of the year when mighty England aren't playing the boyos in red, it's a fun community to be part of.

St David is the patron saint of Wales, and today, March 1st, is his day, and therefore the Welsh in my life go all out to celebrate.  And who am I to miss out on a celebration, even one I'm clinging to tenaciously by the coat-tails?

Last year, as part of the Wellington On A Plate events, we started a bake club at the Welsh Dragon Bar, where Andy is the manager.  You don't have to be Welsh to join, you just have to love baking.  We all loved it so much that we carried on after the official events finished; now we meet once a month and take turns to pick a theme.  Lots of different nationalities, a range of ages and baking experience - the only thing that we all have in common is the firm belief that Baking Makes Things Better.  This month, Andy has asked us all to produce Welsh baking to sample and try.  Somewhat of a challenge for us non-Cymru-born bakers, but if there's one thing we love, it's a challenge.  I fancied something savoury, and so settled on these pies.  I left out the jelly from the original recipe for a few reasons - it was a step too far in the midst of a busy week, but mostly because I'm ambivalent and most people seem to be averse.

My list of favourite Welshmen is long and comprehensive and includes, amongst others, Colin Jackson, Gethin Jones, Steve Jones and Aled Jones (the latter we were involved in a Fawlty-Towers-esque farce with the night after our wedding when we accidentally tried to break into his hotel room.  Yes, it is a long story) but my most favourite Welshman of all is my lovely Andy.

These are for him. 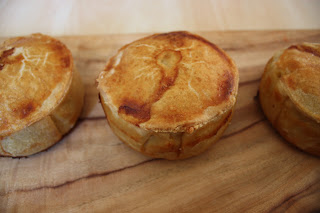 Pork, Leek and Cumin Welsh Dragon Pie*
*Contains no dragon but does breathe a bit of fire
Adapted from Andy Bates

In a large, nonstick frying pan melt the butter over a medium heat.  Gently fry the leeks until soft but not browned, about 5 minutes.  Add the cumin and cayenne, cook for a further 5 minutes.  Spread out on a plat to cool.

In a large bowl, mix the cooled leeks with the pork, and season well.  Divide into four equal balls.  Put in the fridge until needed.

To make the pastry, measure the flour and salt into a large bowl.  In a small pan, bring the water and butter to a boil, pour into the flour and mix until combined into a smooth dough.  Divide this dough into four balls.

Take the first ball and split off two-thirds.  Roll this out into a circle wide enough to fit a small pie tin and overlap the edges.  Carefully fit the dough into the tin, pressing it into the edges.  Roll the remaining one-third into a size large enough to make a lid.  Repeat with the other four balls.

Place one pork ball into each tin.  Brush beaten egg around the edge of each tin and fit a pastry lid on, pressing and pinching to make sure the pastry seals.  Trim off the excess pastry and neaten up the edges.
Make a hole in the top of each lid and brush with egg.

Place on a baking tray and bake for 1 hour.  Leave to cool and refrigerate before serving. 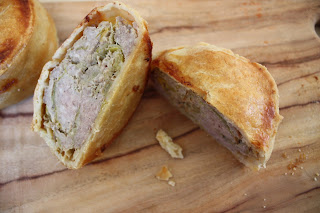