I'm not exactly sure why but whenever I've been away from my kitchen for a while, bolognese is the meal I start craving to make.  There's a distinct difference between meals I yearn to eat and meals I yearn to cook, and with bolognese possibly more than any other it's about the rituals.  Possibly because it is the antithesis of cooking on the road; there, by necessity, food is fast - either cooked on a barbecue, campsite kitchen, or on the hob in the van.  Also, bolognese is one of the meals of my childhood - born in 1976, growing up in north-west England the Mediterranean diet hadn't quite swept through our industrial town, but my Mum fully embraced this dish.  She is a wonderful cook, truly my first teacher, but the bolognese I make today is a different entity to the one we used to eat.

I also like to think this played its part in Andy's and my burgeoning relationship, back when it was still in its infancy - it formed part of the first meal I cooked for Andy in a kitchen of our own, in our lovely flat with parquet floors in Bario Norte, Buenos Aries.

And listen, I know, I know, there are a million and one recipes for bolognese out there.  Everyone I know makes it slightly differently.  Every Italian Mama makes it differently.  This is how I make it, and this works for me -   I just wanted to send it out there.  This is my culinary home, and home can be beautiful place to be.

The one thing that you can't skimp on with this recipe is time.  It's the perfect recipe for a rainy day, when you have lots of pottering to do.  I also think it's a great recipe for sneaking veggies into vegetable-averse people - the vegetables are about equal to the volume of meat.  And about that meat - I vary between doing 50/50 beef mince to pork mince, and just beef mince.  This time round, beef mince was what I had in the freezer, so beef mince it was.  Final point - I rely quite heavily on my food processor for this, but I'm sure there is nothing that couldn't be done with a knife and a bit more time.

In a food processor, blitz the onion, carrot and celery until they are in small pieces (think the size of mince).  Heat the olive oil in a large, heavy-based pan over a medium heat, and fry the blitzed vegetables in this. This will take some time until they fully soften; be patient.

Blitz the bacon, then the mushrooms.

Add the garlic to the pan, cook for a few minutes.  Add the bacon and cook until its colour changes and it starts to release its fat.  Add the mushrooms (it will look like loads).  Cook for another 5 minutes or so, until the mushrooms are cooked and some of the water has evaporated from them.

Add the mince and cook until browned.

Add the glass of red wine - stir until most has been absorbed by the other ingredients.
Add the milk and do the same. Do not be freaked out by how horrible it looks right now - the milk acts as a tenderiser for the mince and results in a velvety texture.  I promise, you will not taste it at the end.

Chop the tomatoes in the can (or, if you are impatient like me, get the kitchen scissors in there and chop them that way) and add to the pan along with the tablespoon of tomato puree.

Put the beef stock cube in the tomato can and fill it to the top with hot water.  Add this to the pan.

Add the herbs, sugar, salt and pepper to taste.

Bring to the boil, then reduce to a low simmer - it should bubble and gloop at you occasionally, but nowhere near a rolling boil.  Then LEAVE IT.

Seriously, it needs about 4 hours to become a beautiful bol.

Taste it every so often - it might need upping on the herbs and the s&p.

After about 4 hours it will miraculously come together into the beautiful sauce that we all know and love.

Eat with the pasta of your choice - I'm too much of a realist to be a pasta nazi - I prefer spaghetti whereas Andy prefers penne, but any port in a storm.  It serves, what, about 8? Maybe more, maybe less, all depends.  It freezes beautifully, if you can stop eating it straight from the pan long enough to portion it up. 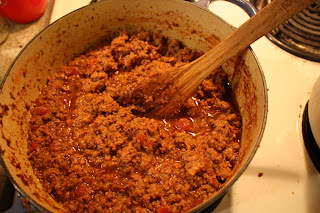