Prawns to use up

Ah, the perils of renting.  Just when you think you have found the perfect house - located close to the sea in chilled-out Lyall Bay, three bedrooms, enough space for two hoarders to spread all their stuff around, good size kitchen, no pesky hills to go up and down, garden for barbecue and herbs and off road parking, your landlords decide to sell up and you are back on the househunting trail.  This isn't another whinge about the soul-destroying process of finding a rental in Wellington (although it truly is the stuff of nightmares), but putting a resolution down in writing. This will be our fourth move in 3 years in NZ; we never seem to learn and just accumulate more stuff each time, including food.  I do not want to move the contents of our freezer, succinctly described by Andy as "bones and juice", so I am on a mission to use up as much as possible before the day is here.

Having exhausted, for now, the possibilities of leftover slow-cooker pork (I sell it on my market stall every week; leftovers get bagged up for our own use), I spied a bag of prawns lurking in there.  My last experiment with prawns was a take on Delia's Prawns with Chilli and Cheese that my dear heart described as "interesting" - yes, that is a euphemism - so I suggested spicy prawn noodles this time.  However, doing some more tidying and packing, I came across a years-old supplement from Sainsbury's magazine, from back in the UK.  Spying an opportunity for procrastination, I was flicking through it when I spotted a recipe for Prawn and Potato Chermoula.  Not a traditional Chermoula, a spicy Moroccan sauce with a thick, pesto-like texture, this was closer to a soup.  I had most of the ingredients except tomatoes of any kind (how on earth did that happen? Kitchen Fail), so I improvised with tomato puree - this was fine, but proper tomatoes would have been better.  Likewise I had used up the last of my fresh ginger, so used 1/4 teaspoon ground.  I had a lonely half a bulb of fennel lurking in the fridge too, so threw that in.

It was absolutely delicious.  Spicy, easy, quick, the perfect weeknight tea.  Both of us wolfed it down, and I wouldn't hesitate to make it again.  It was substantial enough to be filling but not overwhelmingly so on a hot summer night.  Possibly the only addition I would make next time would be a green vegetable; spinach might be a good one to stir through, accompanied by a good spritz of lemon to freshen it up.

In a poignant footnote, the recipe in the supplement comes from the prolific and influential Katie Stewart, who died on January 13.  RIP Katie, I hope this recipe honours your memory.

Oh, and if anyone knows a fabulous, warm, 3 bedroom place by the sea renting for $200 a week, give me a shout.

Heat the oil in a large pan.  Add the garlic, ginger, chilli, onions and fennel and cook over a low heat for one minute, then stir in the paprika.  Add the sliced potato, stirring them to absorb the flavours.

Add the tomatoes, sugar, stock and a good seasoning of salt and pepper.  Cover with the lid and simmer gently for 15 minutes, until the potatoes are tender.  Stir in the prawns and herbs and cook, uncovered, for a couple of minutes to heat the prawns.  Serve immediately. 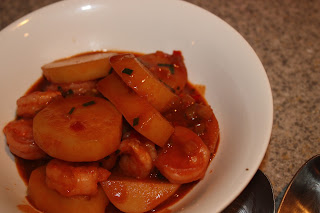