Eton Mess has a somewhat hazy history.  The only thing that is agreed on is that the name comes from Eton College, the posh school in England beloved by incredibly well-to-do people and royals.  I always thought the name came from their traditional Fourth of June celebrations, involved an accident with a pavlova en route, and somehow resulted in a delicious mix of strawberries, cream, and meringue.  Apparently not so  - Wikipedia tells me that the word Mess comes from their canteen (what? That's what we called it at my northern Comprehensive), and would originally have been bananas and cream, with the strawberries and meringues being a much later addition.  I'm not sure whether I dreamed up my versions, or whether there is any element of truth in it.  One thing there is truth in, though, is that this is one of the most delightfully simple-yet-indulgent desserts, and also, a curious amount of people have neither tried it nor heard of it (based on my sample research of 7 people). (What?)

The only point at which mine would differ from the standard would be to include Greek Yoghurt mixed in with the whipped cream.  Not only for health reasons, in fact not even for health reasons, but simply because I like the way it cuts the richness, and the ensuing slight tang sets off the juciness of the berries and the sweet crunch of the meringue just delightfully.  Also, while I would normally be an advocate of Making Your Own Meringue, I can't bring myself to stipulate that so strictly when it's going to get crushed up.  Use the ready-made meringue nests, and your sanity will thank you.

Feel free to go crazy and experiment with different berries and coulis; strawberries macerated in balsamic and sugar is a nice progression; Nigella recommends the use of pomegranate syrup to drizzle over.  I have made a more exotic version using mango and toasted coconut.  But really, you can't go wrong with this.  I could eat this all day, every day.  Messily. 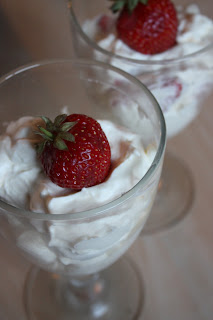 
Whip the cream until cloudily soft but not stiff.  Gently fold in the greek yoghurt.  Holding them over the bowl, crumble each meringue into the bowl, making sure all the crumbs go in too.  Fold in the strawberries.

That's it.  If you want to get REALLY fancy you can put a whole strawberry on top.  But really, that's it.